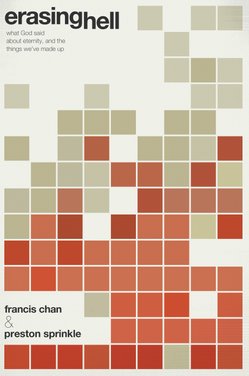 [Disclosure: I received a free copy of â€œErasing Hellâ€ from the publisher a few weeks in advance in exchange for being wiling to review it and post it on July 5. There were no strings attached in giving a positive or negative review of the book: all thoughts below are my own.]

You might have heard a bit about some controversy this past spring over a little book published by Rob Bell called Love Wins. â€œErasing Hellâ€ is Francis Chanâ€™s foray into the subject of Godâ€™s love and the question of hell. Co-written with Preston Sprinkle (but in Chanâ€™s voice), â€œErasing Hellâ€ is both a counterpoint to some of Bellâ€™s arguments and a pretty good, short-form resource on the subject of hell and judgment (particularly in the New Testament). Let me do some summary before I get to appreciations and questions.

Hereâ€™s my summary of Chanâ€™s argument. We live in a modern world where the traditional doctrine and image of â€œhellâ€ is falling on hard times and being reimagined, revised, or even rejected. We donâ€™t want to accept it or believe it, but we donâ€™t get that option. These arenâ€™t just issues of dusty doctrine â€“ they are destinies of real people. We donâ€™t get to decide these things: God does. A respect for Godâ€™s Word as our authority demands that we get back into the biblical world and understand the context, and when we do, we will discover that hell is real. First Century Judaism, Jesus, and the later New Testament are consistently aligned that hell is 1) a place of punishment (retributive) after judgment, 2) depicted with common imagery of fire, darkness, and weeping/lamenting, and 3) results in either annihilation or never-ending judgment (Chan thinks we canâ€™t conclusively answer that question). It is NOT a place of correction or purification or second chances. Implications? Anyone who declares or flirts with a kind of Christian universalism is misleading at best and downright dangerous at worst. â€œDestiniesâ€ are at stake, not just â€œdoctrines.â€ For the church, Chan turns the spotlight back on us and skewers the our willingness to believe in a literal hell but huge reluctance to truly live as devoted followers of Jesus Christ. Finally, he challenges people on their view of God â€“ do we consider ourselves above God, or will we submit to a high view of a God who can do whatever he pleases â€“ including allow a hell?

So whatâ€™s to like here?
1) First, I appreciate Chanâ€™s humility and honesty in addressing a question heâ€™d rather avoid and looking to Scripture. He has a huge respect for Godâ€™s authority and his Word, so he pushes hard on us to be biblical as opposed to stick to a tradition or what is familiar or comfortable. (A personal note: Iâ€™ve sensed both of those things in him when Iâ€™ve seen him speak to students and on video).

2) Second, he is right on the gravity of the situation: whatever must be said on this matter should be taken seriously. Chan: â€œWhen it comes to hell, we canâ€™t afford to be wrong â€¦ too much is at stake.â€ That being said, it is awfully difficult to know if you are right here. If you donâ€™t tremble a bit when approaching this subject, that ought to give you pause.

3) Third, he comes at it with a pastorâ€™s heart and a conversational style. The book feels like someone sitting down at a table with you, leading you through a long, detailed study, then making an appeal to trust this God who shows up in Jesus (and trust what he says in his word!)

4) Fourth, I appreciated his attention to context â€“ especially the 1st century Jewish world of the New Testament (thereâ€™s some great background here and in the footnotes). His examination of â€œhellâ€ in the Greek text and the wider language/imagery of punishment through the NT is much better than Bellâ€™s (who limited it to the words gehenna, tartarus, and Hades and thus missed some key passages). This is the really strong part of the book.

Whatâ€™s not to like or what questions am I asking?
1) Why start out by tackling universalism? Ch. 1 starts with a survey of it that seems out of place â€¦ why not address the language and evidence first in Scripture and them come to conclusions? It sets the tone that this book is not really a study on hell that stands on its own two feet as much as a response and even polemic against some other writers. I was surprised how much of the book addresses â€œLove Winsâ€ in both the text and footnotes, and I found its critique of LW a bit sloppy at times.

2) Whatâ€™s behind the imagery regarding hell â€“ literal or metaphorical or â€¦? Despite a lot of language in â€œErasing Hellâ€ (including a Q&A on the issue), Chanâ€™s book doesnâ€™t convince me here. His alternatives are that the stock imagery in the NT texts is either literal or metaphorical. He lands on â€œmetaphoricalâ€ (rightly, I think) but then concludes there must be a literal hell (as a â€œplaceâ€) behind them. But what exactly are the images referring to? Is it (in each case) a literal place of hell (even if imagery is figurative) or can they serve as familiar markers for judgment and exclusion (much as we might say someone is â€œbeyond the paleâ€)? Since it is often (not always) directed at the â€œinsidersâ€ more than outsiders, does than change the context? Can the references simply be translated out of righteous/wicked into our familiar categories today of saved/unsaved or believers/unbelievers? Some of these interpretive questions go largely unaddressed.

3) Why an artless book? There is nothing compelling (or dare I say, beautiful) about how this book is organized or how it presents its case. It reads as a debate-style response with some application to the reader at the end. Itâ€™s good, itâ€™s helpful, I think itâ€™s true, but it seems to miss the heart of the following question â€¦

4) What is God ultimately like? A key question for Chan is â€œwhat if God â€¦â€ or â€œcould you believe in a God who â€¦â€ In ch. 6, he tackles head on the language of Romans 9:20-23 and Isaiah 45 where God is potter, we are clay, and we donâ€™t get a vote. Chan wants us to face head on our low views of our Creator and â€œstop apologizing for God and start apologizing to Him for being embarrassed by the ways he has chosen to reveal Himself.â€ He is both right and wrong here. Heâ€™s right that itâ€™s not we who get our way and wants, but God who does so. Heâ€™s right to press the issue and ask the question when it comes to the attributes of God. But heâ€™s wrong to seemingly juxtapose Godâ€™s juxtaposing Godâ€™s love, mercy, grace with Godâ€™s holiness and justice and wrath. Heâ€™s right to say that yes, â€œGodâ€™s ways are incomprehensibleâ€ to us â€“ but wrong to not emphasize that they are nevertheless apprehendable in Jesus. Question: what is God really like deep down? Answer: look at Jesus and what you see there. There are fanastic books on this. He gives the beginnings of a good answer, but it needs a deeper treatment throughout.

In my opinion from talking to all kinds of people and students, â€œhow can a loving God send people to hell?â€ is the deep down question lots of people are asking here â€“ not just whether hell is real. And this last is why I think Chanâ€™s â€œErasing Hellâ€ is good but not great. Bellâ€™s book had a lot of weaknesses, but it will be important (I think) in the long wrong because it fundamentally (and brilliantly) addresses what is God like, what does God want, and does God get what God wants? Chan asks the question as well, but tacks it on to the end rather than treating it as the golden thread throughout. Get it as a really good study guide for the issue of hell, but donâ€™t look to it as a place to dig deeply into Godâ€™s character in his work of redemption.

grace and peace – Andy
—
update (07.08.11) – so it turns out that because I volunteered to review it, the publisher will let a few readers get free copies of Chan’s/Sprinkle’s “Erasing Hell” … so if you would like one, please send me your mailing address and the publisher will send it to you!